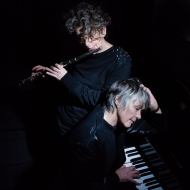 This video is a feminist re-write of the Irish National Anthem re-arranged to a modern ‘electro swing jazz ‘ dance beat retrieving the names of the women erased from the history books to celebrate the 2016 Centenary. Zrazy go back in time to celebrate the forgotten women of the Easter Rising. The lyrics were inspired by a 2015 History degree undertaken in UCD where the syllabus was found sadly lacking in female content.

Sarah Browne, Report to an Academy

Report to an Academy is an adaptation of the Kafka story of the same title, exploring the contemporary academic environment as a neoliberal workplace. Where in Kafka’s story, an ape delivers an address to a gathering on his transition into human life, this film-essay features an octopus who speaks of her motivation to escape and transform herself from human material in search of new forms of articulacy and agility, developed as an auto-ethnography of the institution where she works.

Adapted from Report to an Academy by Franz Kafka

Sarah Browne is an artist based in Ireland concerned with non-verbal, bodily experiences of knowledge and justice. This practice involves sculpture, film, performance and public projects, as well as forms of writing and publishing in diverse contexts.

She has had recent solo exhibitions at Marabouparken, Stockholm (2017), CCA Derry~Londonderry & Institute of Modern Art, Brisbane (both 2014). In 2016 with Jesse Jones she made In the Shadow of the State, a major collaborative co-commission for Artangel and Create that involved close collaboration with women in the fields of law, music, material culture and midwifery, and addressed the position of the female body as the focus of repressed histories and political desires under the regulation of the nation State. In 2009 she co-represented Ireland at the 53rd Venice Biennale. She is currently artist in residence with University College Dublin College of Social Sciences and Law.

Undertaking a documentary about the history of Irish lesbian community is a complex task, not least of which is selecting each word in the title and description of the documentary itself. Documentary, unlike much oral history or social science-based research, can be a personal and artistic journey, one that is more likely to raise questions than provide answers. By posing questions about identity, coming out, community, homophobia and activism to diverse individuals who identified as lesbian or queer, we aim, along with artistic, historical and archival material, to give expression to the richness of Irish lesbian herstories across the island.

Ger Moane is a former academic who has been an activist in feminist and LGBT+ politics for over 30 years. As an academic she published in the areas of human rights, feminism and psychology, and also wrote about the development of lesbian politics and community in Ireland. She was among the group who started the programme in Women’s Studies in UCD in 1990 and the Lesbian Lives conference in 1993, and she has delivered modules in the Women’s/Gender Studies programmes in UCD since. Her activism began in the 1970s as a member of Irish Women United, and later focused on the intersections of lesbian and feminist activism through Lesbians Organizing Together (LOT), community education, pornography and reproductive rights. She is currently Professor Emeritus and also enrolled in the MFA programme in creative writing in UCD.

Sonya Mulligan is a film-maker and writer who has been active in the Arts and in feminist and LGBT+ politics for more than 20 years. Her short films include Into the Wild (GAZE 2011) and Staged (winner of IDSFMF best score 2015) and she has just completed the pro-choice music video Pope with the Artist BeRn and Double Blink Media. She was director of the one woman show Live, Love Laugh (IDGTF, winner of Doric Wilson award, 2012) and Writer/Director of the short play A Dying Shame (IDGTF, 2013). She has been active in Dublin Pride, Lesbians Organizing Together and Outwrite, and was a founding member of Dublin Lesbian Avengers. She co-produced the feminist magazine MsChief and has exhibited and performed poetry at Lesbian Lives conferences, Dublin Pride, ALAF, the Irish Writer’s Centre and numerous other venues.